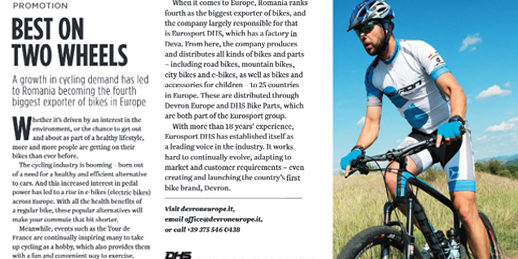 BEST ON TWO WHEELS
A growth in cycling demand has led to Romania becoming the fourth biggest exporter of bikes in Europe Whether it’s driven by an interest in the environment, or the chance to get out and about as part of a healthy lifestyle, more and more people are getting on their bikes than ever before.
The cycling industry is booming – born out of a need for a healthy and efficient alternative to cars. And this increased interest in pedal power has led to a rise in e-bikes (electric bikes)across Europe. With all the health benefits of a regular bike, these popular alternatives will make your commute that bit shorter.
Meanwhile, events such as the Tour de France are continually inspiring many to take up cycling as a hobby, which also provides themwith a fun and convenient way to exercise. When it comes to Europe, Romania ranks fourth as the biggest exporter of bikes, and the company largely responsible for that is Eurosport DHS, which has a factory in Deva. From here, the company produces and distributes all kinds of bikes and parts – including road bikes, mountain bikes, city bikes and e-bikes, as well as bikes and accessories for children – to 25 countries in Europe. These are distributed through Devron Europe and DHS Bike Parts, which are both part of the Eurosport group.
With more than 18 years’ experience, Eurosport DHS has established itself asa leading voice in the industry. It works hard to continually evolve, adapting to market and customer equirements – even creating and launching the country’s first bike brand, Devron.
Visit: devroneurope.it
email: office@devroneurope.it
or call +39 375 546 0438